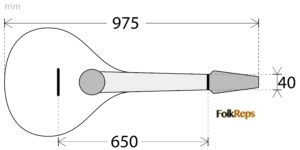 The original Bouzouki is a popular instrument used in Greek traditional music According to historic documents, it’s said that one Irish musician went to Portugal and came across the now extinct Porto-style Portuguese guitar. After returning to Ireland, he designed a guitar that mixed the porto-style body with the original Greek Bouzouki’s neck. Thus making the Irish Bouzouki, an instrument that would be used in Irish folk music, and to this day it can still be seen being played by folk trios in pubs. Tuning used on this video – gG DD AA DD