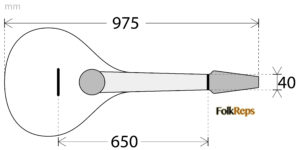 The Irish bouzouki is an adaptation of the Greek bouzouki. The newer Greek tetrachordo (4 courses of strings) bouzouki was introduced into Irish traditional music in the mid-1960s by Johnny Moynihan of the folk group Sweeney’s Men. Alec Finn, first in the Cana Band and subsequently in De Dannan, introduced the first more-traditional Greek trichordo (3 course) bouzouki into Irish music.

In the early 1970s, Andy Irvine gave his Greek bouzouki to Dónal Lunny, who replaced the octave strings on the two lower G and D courses with unison strings, thus reinforcing their lower frequencies. Soon after, on a visit with Irvine to the workshop of luthier Peter Abnett, Lunny commissioned a bouzouki to the specifications of a classic, 4-course Greek bouzouki but with unison strings and a three-piece, partially staved back. Since then, the instrument has been adapted for Irish traditional and other styles of folk music.