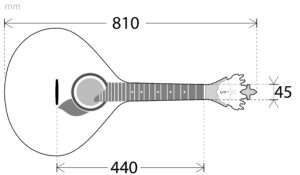 Fado (translated as destiny or fate) is a music genre which most likely originated in the 1820s in Portugal, but probably with much earlier origins. It is characterized by mournful tunes and lyrics, often about the sea or the life of the poor.

The music is usually linked to the Portuguese word saudade, a word with no accurate English translation. (It is a kind of longing, and conveys a complex mixture of mainly nostalgia, but also sadness, pain, happiness and love). Some enthusiasts claim that Fado’s origins are a mixture of African slave rhythms with the traditional music of Portuguese sailors and Arabic influence. Lisboa e Coimbra main differences There’s two different tunes for the Portuguese Guitar Lisbon and Coimbra curiously it’s the name of two important Cities of our country; the 1st is the Capital of Portugal and the other is the most important University City.

For those 2 methods there are different shapes. They’re diverse since the “volute” at Lisbon Guitar it ends in a curl, at Coimbra’s ends in the shape of a tear. The resonating body has different sizes: Lisbon’s smaller then Coimbra’s. Stringing are also distinct: · At Lisbon’s strings are 10 (si) 8(lá) and 6(mi) · At Coimbra’s strings are 8, 6 and 4 (because the instrument tunes in a tone bellow). Speaking of soul can look quite strange, but it’s neaded even to play guitar. As it is an instrument of common roots, with no classical characteristics and it’s even played with no musical learning lessons, its understood that its a major passion learning how to play an instrument just by hearing its sounds and trying to pressure the fingers against the strings.

As I already told, the identification between the person and the instrument is absolutely unique when its played it stirs up our ears for the purest of the sounds as it is so clear, that’s why we currently use the expression “This sound is in my soul!…” it reminds “Saudade” a mist of love and sorrow, a word that has no translation for any other language, used even by our ancestrals when they left the quay…”for seas never explored before”…